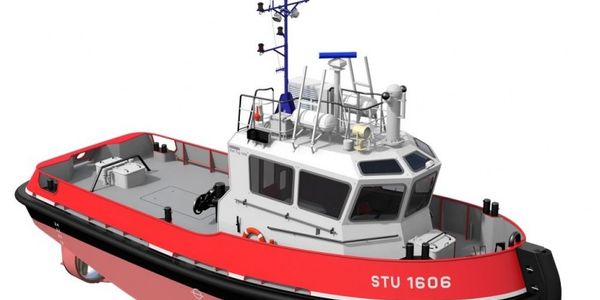 Damen Shipyards Group has recently signed a contract with Société de Remorquage et de Travaux Maritimes (SNRTM) for the delivery of one Damen STu 1606 that shall operate in the Mediterranean Sea in Toulon, France.

Société de Remorquage was founded in 1968 by Yves ARNAL (Mr. Eric Arnal’s grandfather). The company specialises in harbour and offshore towage, as well as maritime transportation. In 1983 the Arnal family created the Société Nouvelle de Remorquage et de Travaux Maritimes (SNRTM) and therefore, has more than 35 years of experience in towing services and maritime transport.

This important milestone is the first contract between the two family-owned companies (SNRTM –Damen Shipyards Group). The sale was administered by Reinier van Herel – it was his last contract as a Damen Sales Manager before taking up his new role as Head of Business Innovation. Speaking on the occasion of the signing, Mr. van Herel said, “I am proud to have introduced these two family businesses to each other. There is a clear match between the two parties and I strongly expect this to be the start of a long-lasting and mutually fruitful relationship.”

Due to Damen’s philosophy of standardised shipbuilding in series, the Damen STu 1606 was already in stock and available for fast delivery to the client. Damen will hand over the vessel before the end of Q1 2019, after completing the Tug in accordance with the SNRTM’s wishes.