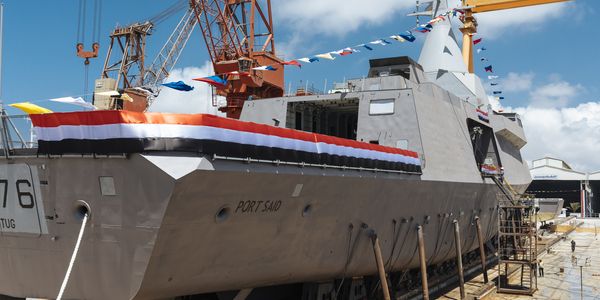 The launching of the Port Said corvette shows the capabilities of the Alexandria shipyard, as it is
the first warship built in Egypt. This launching ceremony celebrates the rise in competences of
the Alexandria Shipyard team which is now able to build civilian boats as well as state-of-art military vessels.

Along with the first ever delivered Gowind® corvette, El-fateh, already deployed by Egyptian
Navy on many operational theatres, it will contribute to increase the Egyptian Navy Power. The
corvette is part of a strategic and long-term partnership with Egypt. It is the fifth ship designed
by Naval Group, operated by the Egyptian Navy, after the already delivered FREMM frigate
Tahya Misr in 2015, the two Landing Helicopter Docks Nasser and Sadat in 2016 and the firstGowind® corvette, Elfateh, in 2017.

Hervé Guillou, Naval Group’ s CEO declared: “Naval Group is very proud to be part of this longterm
partnership with the Egyptian authorities and industry. This ceremony is an opportunity to
reiterate our strong commitment to execute all the programs and to equip the Egyptian Navy
with an homogeneous fleet. In addition, Naval Group is pleased to participate in the maintenance and modernisation of this fleet. Naval Group has a long-term presence in Egypt and will remain
involved for many years to come in Alexandria as partner of the Egyptian Navy to secure their
operations. ”

Naval Group’s commitment to support customers through transfer of technology at each stage
of the construction process is reaffirmed. Port Said, the first ever Egyptian made warship, is a proof that industrial cooperation works. The corvette manufactured in Alexandria has identical
features and possesses the same performance level than the sea-proven Elfateh, which was
built on Naval Group’s site in Lorient and delivered to the Egyptian navy last autumn.

10 Gowind® corvettes sold around the world

The modular design of the Gowind® corvette enabled Naval Group to meet the specific
requirements of the Egyptian navy in the shortest time scale possible. The Gowind® corvette,
ordered in ten units, meets the challenges faced by navies in changing war environments and
offers a complete, multi-mission combat ship for sovereignty operations, the fight against illicit
trafficking or maritime protection.

The Gowind® corvette is a concentrate of the latest technological advances developed and
mastered by Naval Group in naval defense. It integrates the latest generation of combat
systems developed by Naval Group, SETIS®, the "Panoramic Sensors and Intelligence Module
(PSIM)" - a combination of the integrated mast with its various sensors and the Operational

Centre and associated technical premises - and the high level of integration, automation and
user-friendliness of the Naval Group systems. In addition to the Egyptian contract; Malaysia
bought Gowind corvettes in 2012.