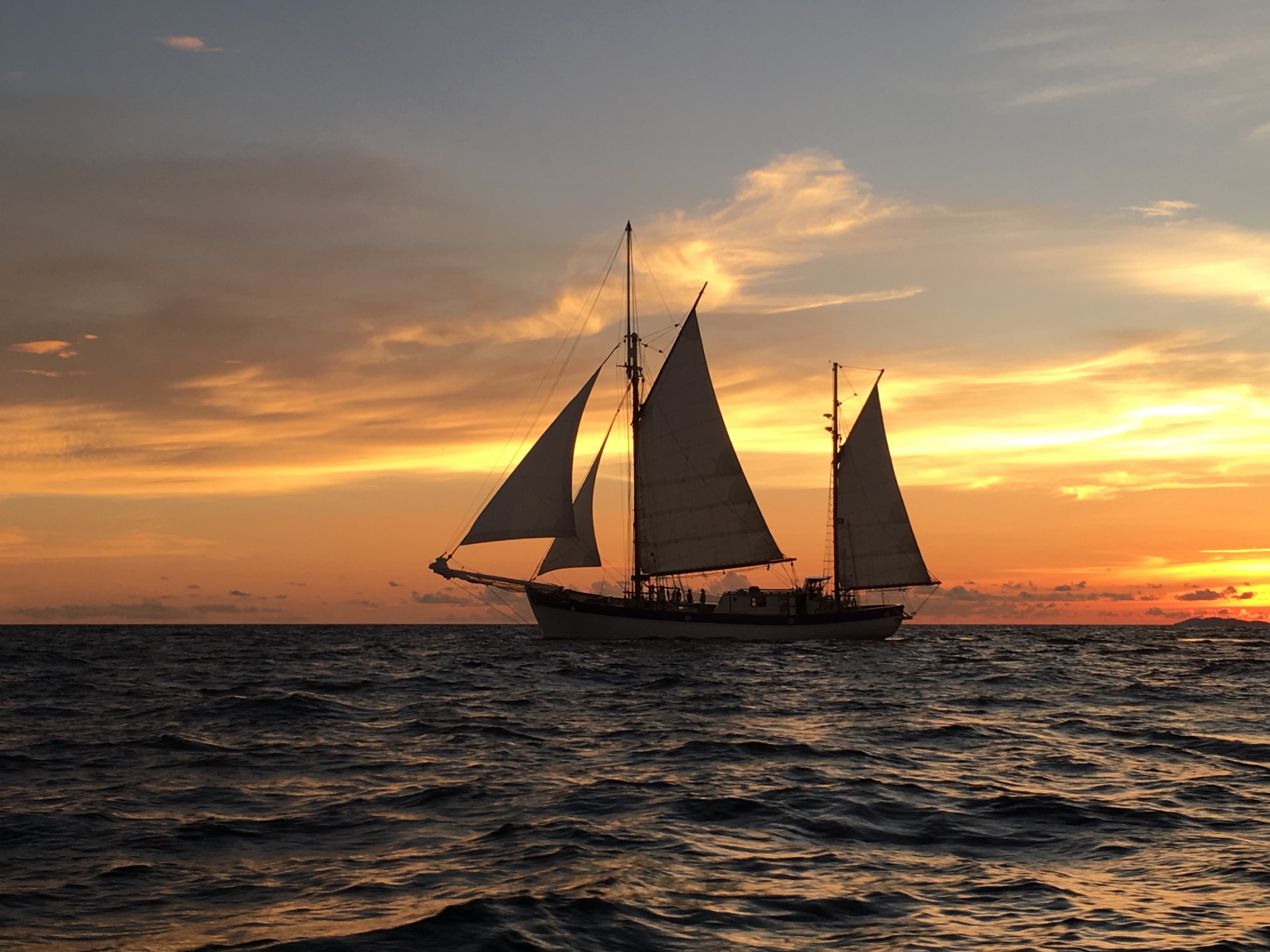 The Swiss expedition The Ocean Mapping Expedition, which has been engagedsince 2015 in a four-year world tour of sailing in the wake of Magellan to measurethe human impact on the oceans, is launching a new program to monitormethane and carbon dioxide using sensors installed on the Fleur de Passion sailboat,in partnership with the University of Geneva.

The purpose of this pioneering initiative called The Winds of Change:
to collect ground-breaking and new ground data to enable the global scientific communityto better understand the role of the oceans in the carbon cycle
and the issue of global warming. Start of the program in Cebu/Mactan, Philippines,where The Ocean Mapping Expedition stops from 8 December 2017 to 20 January 2018. 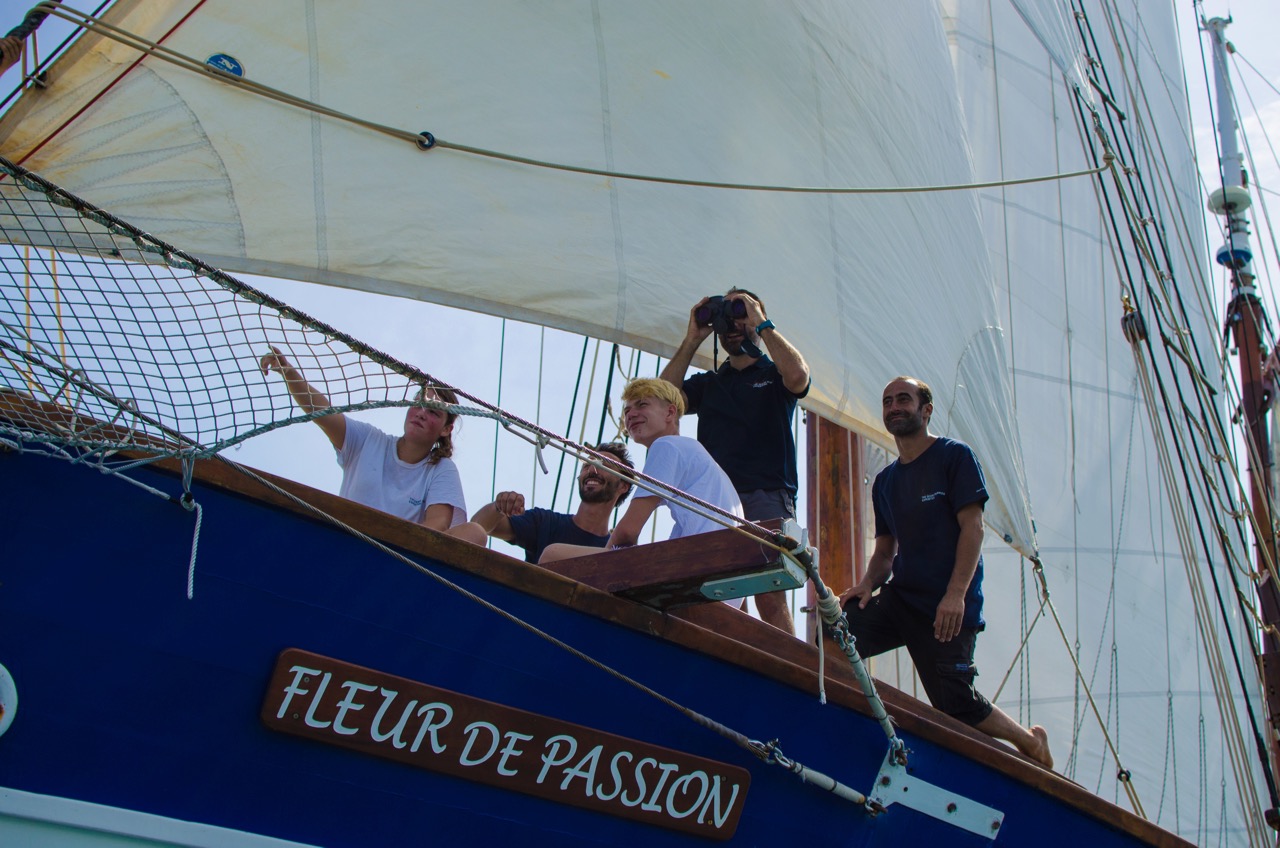 The fight against global warming is everyone's business andinvolves the engagement of institutional, academic as well as private actors from civil society. Theproof by The Winds of Change, a pioneering program that the Swiss Fondation Pacifique and theUniversity of Geneva are launching jointly from Cebu/Mactan, Philippines.

Indeed, the sailing ship Fleur de Passion will soon open a new chapter in its commitment to theoceans and sustainable development issues. From January 2018, the 33-meter ketch and largestSwiss-flagged sailboat engaged since 2015 in The Ocean Mapping Expedition, a four-year worldtour in the wake of Magellan designed to map the human impact on the oceans, will continuouslymonitor greenhouse gases (methane and carbon dioxide) on the surface of the oceans thanks tosensors installed on board. It will also have equipment that will allow parallel measurements ofdissolved gas in the water column.

This monitoring will be carried out as part of a new scientific program, The Winds of Change,developed by the foundation in partnership with the aquatic physics group of Department F.-A. Forelof the University of Geneva. Unprecedented in its geographical scope, this program aims to betterunderstand the role of the oceans in the issue of global warming. It will begin from Cebu/Mactanwhere the boat, coming from Indonesia, is doing a stop from 8 December 2017 to 20 January, andwill continue until the return of the expedition to Seville in August 2019.

« The Winds of Change monitoring program for greenhouse gases on the surface of the oceans willallow our partner, the Department F.-A. Forel of the University of Geneva, to collect new field dataon a rather hot topic, if we dare say: global warming, » says Samuel Gardaz, Vice-President forPublic Affairs of the Fondation Pacifique, a non-profit organization based in Geneva and initiator ofThe Ocean Mapping Expedition.

As explained by Prof. Daniel McGinnis, head of the Aquatic Physics group of Department F.-A. Forelof the University of Geneva and project manager The Winds of Change, « climate change is one ofthe greatest challenges facing our time and its understanding is a major challenge for the scientificcommunity. In order to be able to effectively reverse the trend, scientists need to have acomprehensive and accurate view of the concentrations of greenhouse gases on the surface of theoceans and to be able to better understand their role not only as reservoirs of such gases, but alsoas emitters, of emission source. "

« But the oceans emit more greenhouse gases than previously estimated, according to theIntergovernmental Panel on Climate Change (IPCC), » Prof McGinnis insists. It is therefore urgentto re-evaluate the role of the oceans in the global carbon cycle for a better understanding of globalwarming issues. »

« A pioneering project such as The Winds of Change aboard the Fleur de Passion sailboat istherefore a necessity to collect in real time and continuously along the way, field data that we lackon greenhouse gases. and to allow science to take a step forward in understanding the role of theoceans in the current global warming process, » he continues. 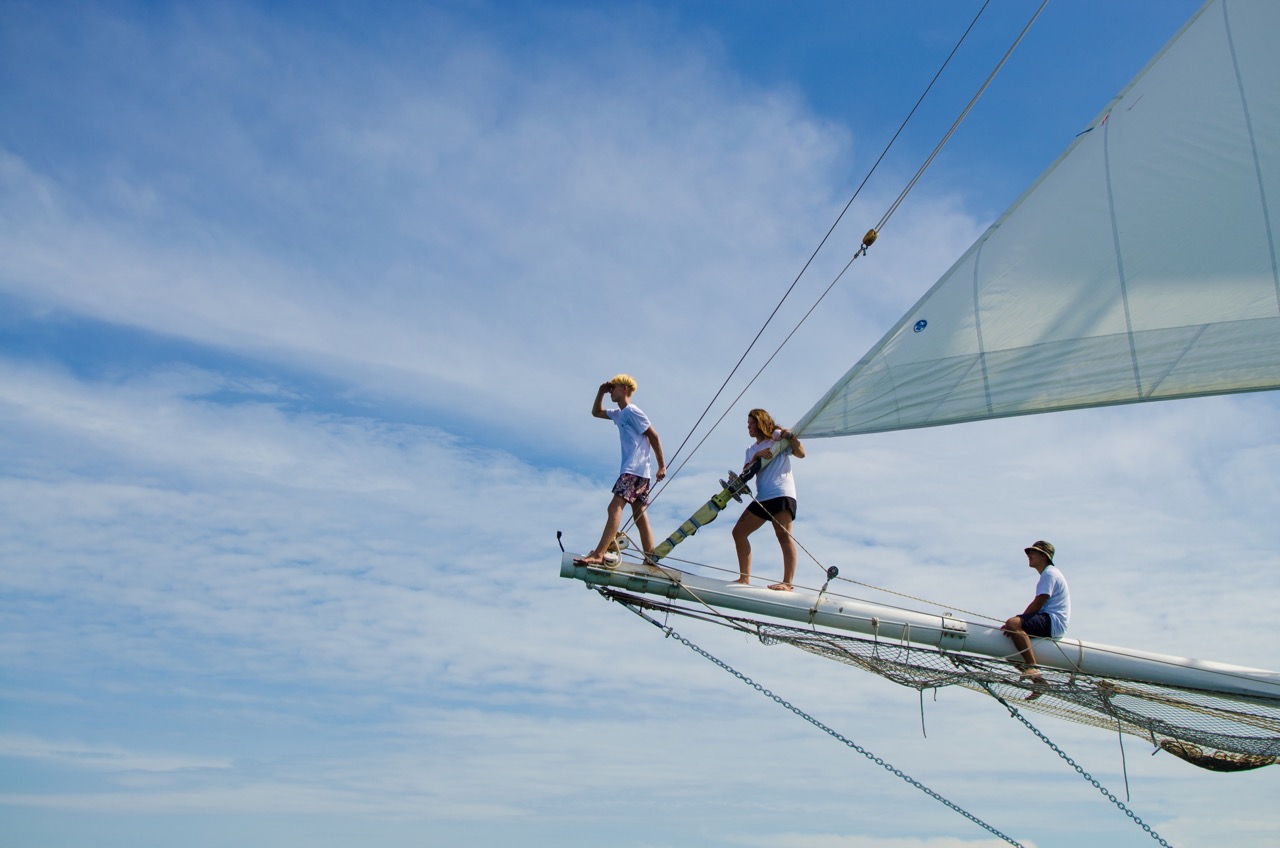 Evaluating gas exchanges between oceans and the atmosphere

Specifically, portable sensors (ultraportable greenhouse gas analyzer) will be installed at the head ofthe mast and will carry out automated air sampling while equipment (Niskin bottle and YSI multi-parameter probe) implemented by the crew will be used to analyze the concentration. seawater todissolved gas and to obtain profiles of the water column (quality, temperature variation, pH,dissolved oxygen, conductivity, chlorophyll and turbidity).

These different types of measurements will make it possible to evaluate gas exchanges betweenoceans and the atmosphere. The data collected will be used to validate and / or better calibratethose currently derived from satellite measurements and oceanographic and atmospheric models.They will also help identify hotspots, which are very concentrated places, to determine where tofocus future scientific research.

« The Winds of Change program once again illustrates the potential and interest of a sailboat likeFleur de Passion in terms of scientific research in addition to more conventional oceanographicvessels, » adds Gardaz. It will provide the opportunity to access essential information at a verylarge geographical scale to complement that available by satellite so far at a time when the globalscientific community is specifically alarmed by the lack of data on this issue. »

A pure initiative of civil society

« The Ocean Mapping Expedition, as a pure initiative of civil society - in this case Switzerland andGeneva - demonstrates how much commitment to the environment and in the fight against globalwarming is everyone's business, » he also says.

Professor and climate scientist Martin Beniston, for his part, emphasizes « the great importance »of The Winds of Change program from a scientific and environmental point of view. « In view ofthe worrisome evolution of the climate and the resulting ocean acidification, it is becomingincreasingly urgent to have baseline data available to revise our concepts on the global carboncycle, he says. As a climate physicist, I can only encourage such steps to improve our knowledge. »

« I would also like to welcome here the pioneering and daring joint initiative of actors fromacademia, in particular the Aquatic Physics group of the Department F.-A. Forel of the Universityof Geneva, as well as a non-profit organization, the Fondation Pacifique, in their common searchfor solutions to better understand and better popularize the issues we face, » he continues.

Since leaving Seville in April 2015, The Ocean Mapping Expedition, which aims to contribute to abetter understanding of the human impact on the oceans and a greater awareness of the issuesof sustainable development, already leads two programs unpublished by their nature or scope:the 20,000 Sounds under the Seas program on ocean noise pollution, in partnership with theLaboratory of Bioacoustic Applications (LAB) of the Polytechnic University of Catalonia inBarcelona, led by the biologist and French engineers Michel André; and the Micromegas programfor mapping micro and meso-plastic pollution on the surface of the oceans in partnership with theOceaneye association in Geneva. So far, 120 surface water samples has been collected.

Since April 2017, the expedition has opened a second field of investigation on the theme of globalwarming, the second major human impact on the oceans with pollution and overfishing. Inpartnership with the CoralWatch project at the University of Queensland in Brisbane, Australia, theFleur de Passion crew is conducting observations on the health status of corals, victims ofbleaching due to warming waters. At the end of November, more than 1,000 observations hadbeen made in Australia, the Solomon Islands, Papua New Guinea and Indonesia, as theexpedition continued its course in Magellan's footsteps. Transmitted to CoralWatch, they feed alarge database managed by the project and covering 77 countries.

In parallel with scientific programs, The Ocean Mapping Expedition includes a sharing ofexperience. This translates into the welcome aboard Fleur de Passion of teenagers break in theframework of the socio-educational program Young at Sea, in partnership with the Genevaassociation Pacifique, but also passengers embarking as team members. Since April 2015, 36teenagers and young adults have boarded by two-three or in groups, for two months on averageas part of this program as well as some 50 passengers. 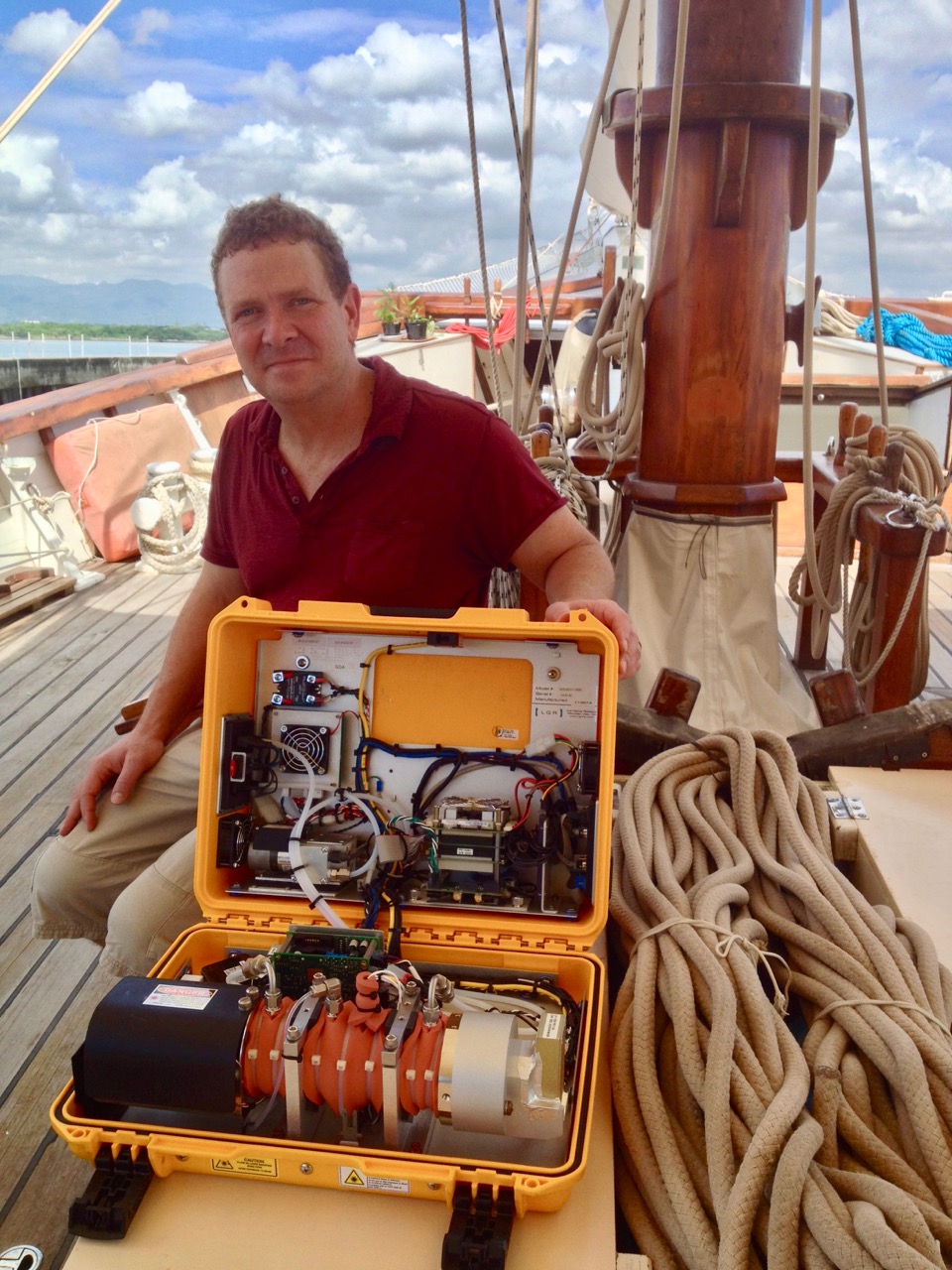 Among the awareness-raising activities, The Ocean Mapping Expedition welcomes stopovers onboard Fleur de Passion, especially for children. In Geneva, she organizes since the beginning ofSeptember 2017 and until January 31, 2018 the exhibition "Our spice islands" at the Bibliothèquede la Cité. In particular, there are some of the sketchbooks and drawings of the ten illustratorswho followed one another "in residence" aboard Fleur de Passion.